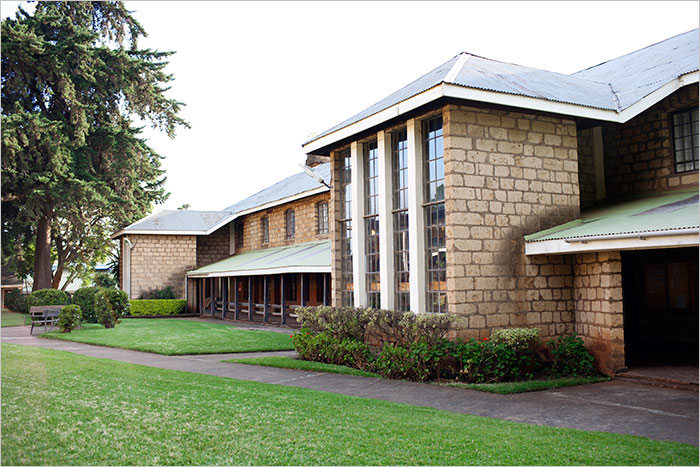 As Charles Hurlburt faced the dilemma of either relinquishing his children to education in England or abandoning his missionary calling, he devised a surprising solution: he’d keep both. He asked new missionary Josephine Hope to teach his children right here in Kenya. They soon drew up plans for dormitory and classroom space, and in 1909 President Teddy Roosevelt laid the cornerstone of the main building, Kiambogo.

Early decades were marked by difficulty recruiting staff, further complicated by World War I and later II. Herb and Mildred Downing took up the mantle of leadership during this lean period. They pleaded for teachers and funding, recognizing that the school was vital to parents’ ability to stay on the field. RVA expanded its facilities and extended education through the 12th grade, hosting its first graduating class in 1950. 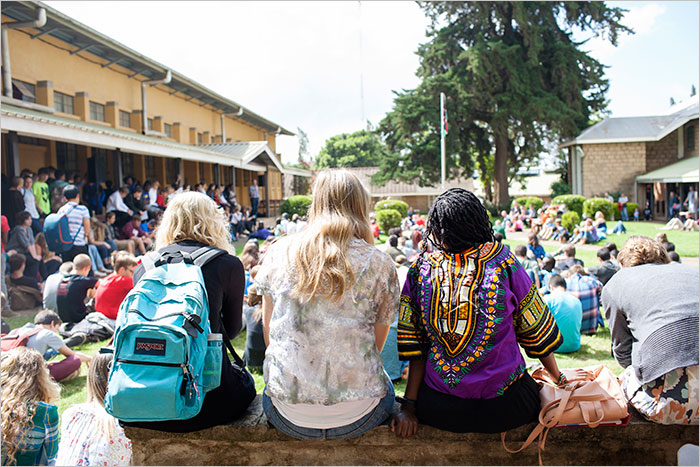 Kenya’s independence in 1963 burgeoned the missionary population and launched an era of growth at RVA. The school established athletic, music, and drama programs, and a spirit of educational excellence emerged. In 1967, under Roy Entwistle’s leadership, RVA was the first school in Africa to receive American accreditation.

Subsequent decades saw continued growth in enrollment and facilities, as well as a focus on creating a nurturing environment for RVA’s students. The school gained national recognition in the arts and athletics, and global recognition in academics.

At present, RVA serves about 500 students from Africa, the Americas, Asia, Australia, and Europe, and the school continues its march toward spiritual vibrancy and academic excellence.

Click here to read the full history of RVA

In 1906, faced with the dilemma of abandoning either his children or his missionary calling, Charles Hurlburt asked new missionary Josephine Hope to teach his children. She agreed, and the school that would become Rift Valley Academy was born. The first students met in a missionary home until the chapel building was finished, giving them their first classroom.

In 1908, an American donated funds in the name of his stepmother, Mrs. Butterworth, to establish a school for missionary children. Mr. Hurlburt and Miss Hope drew up plans for a school that could accommodate an influx of missionaries, and allow the school to grow beyond its then maximum enrollment of 10. Their ambitious plans included dormitory and classroom space for up to 40 students. In August of 1909, President Teddy Roosevelt (who was in Africa for a hunting trip) laid the cornerstone of the Kiambogo building.

For much of the early history of the school, teachers were difficult to find. Most missionaries had come to Africa to preach the gospel, not to educate missionary children. After Miss Hope, the next teacher who felt called to RVA was Miss Muriel Perrott. She introduced RVA to British sports such as Rounders and Rugby, and instituted the two-house system. The houses, named after explorers Stanley and Livingstone, competed against each other academically and on the sports field. For years, many students’ fiercest ambition was winning the house cup.

Just as WWI broke out, Miss Hope (now Mrs. Westervelt), was forced to leave the field due to poor health. These years were hard for RVA, as the dangers of wartime sea travel prevented staff recruitment, and a number of epidemics caused intermittent school closures.

In 1933, Herb Downing was called to head RVA. As one of the first Americans born in East Africa, and an alumnus of the school, he was uniquely prepared for the job. He came with educator and administrative experience, which proved useful as he and his wife, Mildred, were the only staff members and therefore both needed to teach. Downing aimed to establish a lasting and positive school culture, allowing parents to feel comfortable sending their children to RVA. It was during his time as principal that the school became deliberately academic. Another Downing innovation was the introduction of Rendezvous or Mutton Guz, a party rewarding those students who had not behaved too badly over the term.

Herb Downing went on furlough in 1938, and WWII delayed his return until 1947. Once back at RVA, Mr. Downing became convinced that the school was vital to the future of African missions. He pleaded for teachers and funding, recognizing that without the school, many parents would not be able to stay on the field, and that RVA was in a very real way training the next generation of missionaries. He labored to extend RVA through the 12th grade; prior to this, students had to return to their home countries for their high school education. In 1949, Mr. Downing’s dream was realized with the graduation of Paul Smith, followed by the first class’s graduation in 1950. The school expanded considerably during this era, with many new buildings erected.

With Kenya’s independence in 1963, the population of missionaries grew considerably. This decade founded many of the activities currently flourishing at RVA. The school began an interscholastic sports program with basketball and rugby. The choir and band programs were nationally recognized, accompanied by a strong drama program. Students began taking college entrance exams, the National Honor Society’s chapter of Elimu Bora was founded, and a spirit of educational excellence emerged. In 1967, under Roy Entwistle, RVA was the first school in Africa to receive American accreditation.

In the 1970s, overcrowding presented the school with several challenges. Many of the nearly 400 students were sleeping on floors, and an overwhelming student-to-staff ratio left scores of students without adequate supervision. When Roy Entwistle accepted the role of the principal in 1976, he began building smaller and more numerous dorms, while also bridging students and staff members through relational programs like Caring Community.

RVA continued to grow in the 1980s. Under the leadership of Mr. Entwistle, the school gained national recognition in sports and global recognition in academics. As RVA reached its full complement of students, the school board capped enrollment at 550. In 1981, RVA’s rugby team won the inaugural Prescott Cup, and in 1994 they obtained this trophy for the 10th time in 14 years.

In 1998, Roy Entwistle handed leadership of the school to Jim Long, who served as superintendent for five years, followed by Tim Cook, Tim Hall, and Mark Kinzer. Currently, Peter Wilson helms the school, and RVA continues its march toward spiritual vibrancy and academic excellence.

Africa Inland Mission is an evangelical Christian mission agency serving in over 20 African nations. Our passion is to see Christ-centered churches established and thriving among all of Africa's peoples.